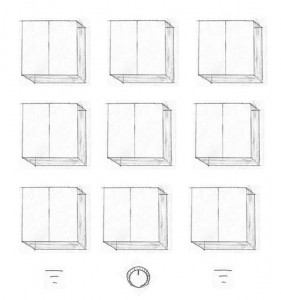 Speaking Boxes is more than just a fun device to play with: it proposes a new, animated and efficient way to organize your belongings. The device presents nine small white interactive boxes arranged in a square sequence that automatically opens and closes when the user rotates a bakelite knob. Each box speaks with its own personality such as by the way it opens and by outputting a distinctive sound effect when they open and close. By ascribing separate characteristics and behaviors to each box helps the user recognize the differences between them, which in turn, gives them the capability to quickly identify which box their belongings are organized into. When the knob is turned and settled into a location, a box quickly opens while the preceding one closes. The user may then take an object out of the open (selected) box and place it into another one. All the boxes open and close just by turning a knob. Speaking Boxes may also be portrayed as a creative art piece. For example, a mystery memory game can take place where the user can be instructed to find objects from the boxes based on given clues. All controlled with a knob! By using this device, you can find your items a lot quicker and easier without having to go through the frustration to opening and closing boxes with your hands. Wow, technology is really making us become more and more lazy. If all goes well, we also plan to incorporate a security system into the speaking boxes, where if the user attempts to open any of the boxes with their hands, a buzzer alarm will be heard.

Nine white boxes
5 solenoids (to open the flaps of five of the boxes)
4 servo motors (to open the flaps of the four other boxes helping us generate a variety of behaviors in the way the boxes open).
4 rods (to be used to open the boxes with the servo motors)
Arduino microcontroller
Breadboard
Bakelite knob
Wood/Old Antique (if we decide to make the device look like an antique)
Speaker/Buzzer
LED’s
Electrical wire
Colored paper (each box will have a different colored base inside of them)